Book Review: Leah on the Offbeat (Creekwood #2), by Becky Albertalli 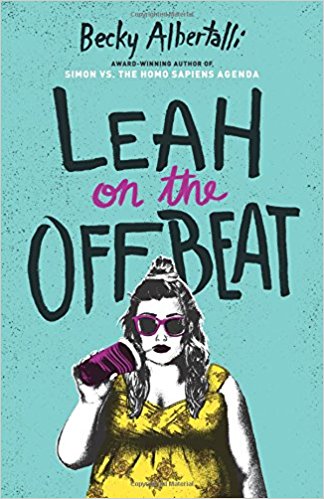 Light spoilers for Simon Vs. the Homo Sapiens Agenda and Leah on the Offbeat follow. Read at your own risk.

There’s a saying about sequels never being as good as the original, and it’s usually applied to works originally meant as standalone where popularity or profitability leads the creator to produce a part two.

This saying usually rings true. And Leah on the Offbeat, I’m sad to report, isn’t the exception.

The thing to keep in mind is that this book was never meant to exist. There weren’t plans for it back when Simon Vs. The Homo Sapiens Agenda first released, and it only became a thing because of the wild popularity of that novel. Which isn’t necessarily a bad thing.

But this book changes things, and not necessarily for the better. Its very premise is flimsy, because it hangs on one of the previous book’s main characters (Leah) being a closet bisexual – which is believable enough – and ANOTHER character from that same book, who Leah happens to like, ALSO being a closet bisexual. And into Leah.

I get that Albertalli wanted to write a F/F romance. And hey, I’m all for it. But perhaps tacking it onto the Simon cast wasn’t the best idea out there, because this story feels anything but natural. Plots seems to advance just because at times, the main romance isn’t believable for the simple fact that it seems extremely unlikely, and to be honest…

At no point during this book are there any stakes whatsoever.

There’s also little to no plot, or themes, which is also an issue. Slice of life stories are often plot light – I myself mentioned in my review for The Upside of Unrequited that it was light on that respect – but Albertalli can do better, as she has shown on both her prior books. Simon had a plot (Simon being blackmailed while trying to figure out his penpal’s identity) and themes (coming to terms with who you are.) Upside also had a plot (Molly trying to find a partner of her own) and themes (rejection, growing apart, putting yourself out there.) Leah… Leah has neither.

Leah on the Offbeat has no plot, because never during the story does it seem like there are stakes or a clear goal. It’s just a bunch of somewhat related things happening, with Leah playing the observer more often than not. Which is expected, because without a clear goal what is she to do? The only part of the book where something seems to be at stake and it looks like trouble might be brewing comes right at the end… and it is promptly swept under the rug, the whole thing fixed with an email months later.

Just as well, Leah on the Offbeat has no themes, because by the end of the book Leah is basically the same person she was at the beginning. There’s no growth or learning or changes whatsoever in her life other than getting a girlfriend, and even the process leading there isn’t one of self-discovery or growth. It just… happens.

Then there’s the issue with there being no stakes or proper setbacks. In Simon, Simon’s initial guess of who Blue might be is Cal Price. Which immediately meant Blue couldn’t be Cal. Just as well, the very first crush (we meet) in Upside is not the person Molly ends up with. Because, well, making it too easy for the protagonist is problematic. But enter Leah, and the very first person she mentions liking happens to be a Secret Bisexual™ and crazy over her and what’s the point?

So, to be honest, I have issues with this book. It has a difficult to believe premise and an execution that’s just half there. And the worst part is, this is coming from an author who I know can write. Albertalli has written books with plot and themes and nuance, but somehow Leah is sterile of all of these things. It feels, at times, like a work of fanfiction that somehow got published. Which saddens me, because I expected more from an author who can do more.

On the upside, the book is generally entertaining. It’s nowhere near as addicting as Albertalli’s two previous outings and not as interesting either, but it is an easy read. There are deep problems here, but the writing itself isn’t one. The book is also rather funny, although sadly all the comedy in the world can’t quite save a book that, lacking a plot, comes off as fluffy.

Rating it three stars because it’s not terrible and it entertained me a bit. But honestly? Skip it. It’s an unnecessary, unlikely addendum to an excellent book that didn’t need a sequel.