Book Review: Into the Drowning Deep (Rolling in the Deep #1), by Mira Grant 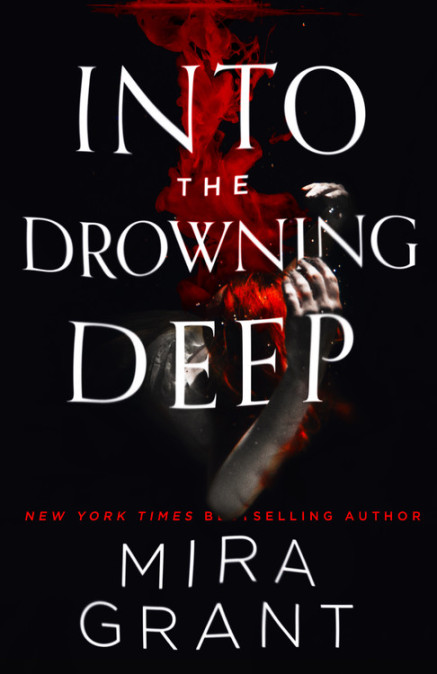 A horror film disguised as a book.

That’s the main thing I can say about Mira Grant’s Into the Drowning Deep: It feels, and reads, very much like a horror film. In that way it’s different from any books I’ve read before, as most of the Horror literature I’ve been exposed to had markedly different pacing and tropes than what we usually find in movies, while here Grant feels content with embracing horror b-movie standards. The result is a novel that, while not a movie script, wouldn’t be all that difficult to adapt.

It might even make a better film than a novel.

The setup is a standard for horror, particularly horror films: A motley crew of characters gathers for an expedition. Expedition goes out to the sea to find mermaids. Expedition finds mermaids. Mermaids happen to be killers. Carnage ensues. Even the characters themselves are standard horror fare because, well, I don’t really think Mrs. Grant ever set out to reinvent the wheel here. She knows what she’s writing. She’s sticking to what works. And she’s making it work.

Now, even when it reads a lot like a b-horror film it is at least a very well written one, at least for b-horror film standards. Grant can develop characters nicely (while using a notoriously diverse cast, including two LGBT characters, an autistic character, and two deaf characters,) and, for most of the book, it is easy to understand the characters’ plights and motivations, which eases us into reading the at times overtly long expository paragraphs.

For all its achievements, the novel does have its flaws.

Mainly, it feels too long for what it is – it just takes too long to find its footing. The first 100 or so pages are basically backstory, and the actual adventure doesn’t start until well after that. This makes for a very, very slow start to a novel that perhaps shouldn’t take so long to get going, something I’m sure has made it lose readers. The cast of characters can also feel too big, with some characters introduced for the express purpose of having them killed – this works great on cinema, but in my opinion not so well in writing where we expect every scene to advance the plot somewhat and gratuitous deaths just feel like a detour.

The choice of having the novel happen in 2022 feels like a misstep to me too, since Grant depends on certain technological advances that just don’t feel at all possible in just the 4 years between now and then – particularly when she says humanity can speak with dolphins to the point of having conversations with them and has been doing so for a decade. No, sorry. We aren’t talking with dolphins at this point, it’s not happening any time soon, and it sure wasn’t happening six years ago. Suspension of disbelief lost.

Its ends too quickly, and basically lacks a denouement.

The novel takes just too long to get going, but the ending does the opposite: It wraps up of sudden, leaving a bunch of things in the air, lots of questions open, and with the actual, final threat discovered, understood, and dealt with in but a few pages. No sooner have we found what the main threat is than it has been dealt with. And then the story ends, without giving us so much as closure for the surviving characters.

I’ve settled on a four-star rating for this because the main question I ask myself – did I enjoy this? – I can only answer positively. For all its flaws, Into the Drowning Deep is a fun, interesting read, even when it can’t possibly be called groundbreaking. I didn’t find it particularly scary, but I know some people have so your mileage might vary on that. However, if you’re starving for horror literature you can definitely do much worse than this – even if you stick to reading the masters of the genre.