Book Review: Of Magic and Memory, by Cristy Zinn 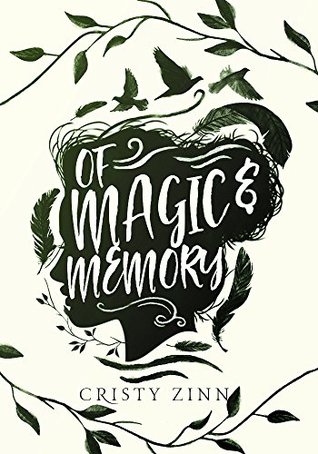 Very much a modern-day fairy tale.

After her mother’s sudden passing, Ava finds herself alone as the world lacks what everyone used to think of as her mother’s magic, that touch and attitude with which she made everywhere a better place.

Only, it turns out it was actually magic. Hiding in plain sight, as it happens. And with her magic gone not only is her hometown a sadder place, but those close to her are in danger – starting with two bird/human chimeras Ava’s mother had adopted and kept conspicuously hidden among the woods without telling anyone, not even her own family, about them.

On loss, rebirth, and… romance.

Being a definite part of YA fantasy, it should shock nobody that Of Magic and Memory has romantic elements, or that said elements happen between the protagonist and basically the first (actually, second) boy she meets in our tale. However, reducing this story to a romance would do its actual theme, and one of the reasons I liked it so much, great disservice: This is a book about loss. The story begins with loss, there are smaller, although still significant losses in the middle, and even the closing pages are sprinkled with possible loss rearing its head yet again.

Now, there are hundreds, if not thousands, of YA books dealing with loss. It’s hardly something new, yet Zinn manages to make it feel different by focusing not just on the tragedy of losing people close to you, and not just on the process of healing – but also on the process of discovering we never entirely know people. If anything, Ava’s emotions as she realizes she didn’t quite know her mother are the main driving force of the novel, as she’s confronted with more and more facts her mother had hidden from her and later forced to accept and come to embrace them.

Since I’m a bit of a YA lit fan (and in a way a perpetual teenager – for better or worse,) it’s no surprise I enjoyed this book. However, what I wasn’t expecting that I must stress is how deep the narrative goes without straying off the path – after all, Of Magic and Memory delivers a fairy-tale structure while touching themes seldom explored by the likes. Its execution might not be the best, and certainly this novel won’t make you rethink your way of seeing the world or question the human psyche – but then again, it never sets out to. For what it attempts to do, and for what it does, Of Magic and Memory is a perfectly fine exemplary of YA fantasy.

Note: I didn’t take this to account when writing this review as I considered it mostly irrelevant for my purposes, but the Kindle edition I got seems to have several formatting issues – starting with odd, double-line spacing, misplaced headers, and strange signaling for side-scenes. It doesn’t make the book unreadable, but sadly it makes it look less than professional. If the author or anyone involved in the publishing of this book reads this, reviewing the formatting for the Kindle edition is a must.