Book Review: The Upside of Unrequited, by Becky Albertalli 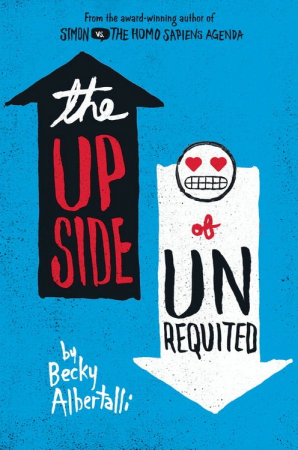 The Upside of Unrequited
by Becky Albertalli
April 11, 2017
Review rating 4/5

I believe Albertalli has done it again.

A bit over a month ago, I absolutely fell in love with Simon Vs. The Homo-sapiens Agenda, Becky Albertalli’s debut novel about a gay teen dealing with coming out in what’s likely the least stressing environment anyone has ever faced such dilemma in. Hungering for more of that incredibly happy, light on drama storytelling, I grabbed The Upside of Unrequited just a few days back trying to see if Albertalli could bottle lightning twice.

And the answer is yes. Also, no.

Following suit with what seems to be her own agenda of writing about minorities and often ignored groups, this book follows Molly Peskin-Suso, a plus-size teenager with an anxiety disorder dealing with the woes of being seventeen and having never been kissed despite a stroke of twenty-seven crushes. Sure, the concept sounds utterly ridiculous when read as an adult, but when you’re seventeen these things are serious stuff so let’s give the girl a pass. She’s hurting because everyone around her is lucky with love and her twin sister just got herself a very cute girlfriend and she’s alone.

That is to say, this would have been unbearable weren’t Becky’s writing voice masterful and able to carry the plot. Because really, if you had sold me the novel as the woes of a boyfriend-less girl without me having already loved something by the author I would have skipped it. I’m glad I didn’t.

To top off Molly’s problems, she also happens to be begrudgingly crushing on a co-worker of hers, while trying her best to crush on another guy who happens to be best friends with her sister’s girlfriend. So she tries to go one way that, she hopes, will keep her close to her twin, while her hearts tugs the other way. Way to go, Molly.

As you all can see, the plot here is not precisely the stuff Dickens novels are made of.

And that’s fine. It doesn’t need to be, although I’d be all in for a Dickensian romance starring a seventeen-year-old plus-sized Jewish girl born to lesbian mothers. But the thing about The Upside of Unrequited is that, just like Simon Vs. The Homo-Sapiens Agenda, it isn’t *quite* your standard romance. Yes, there’s romance involved, but it’s not a sappy book full of fantasizing and whispering sweet nothings and long kissing scenes under a tree on the hill overlooking the city while the sun sets. The actual romance is relegated to the closing chapters, while the rest of the book deals with the way there.

And the way there is what makes it good because…

In its core, The Upside of Unrequited is a novel about rejection, about losing those around us to time and growing up, and about learning to deal with the world often not being fair.

This means two things: first, it ends up being much more interesting than its premise makes it seem at first; and second, it is a much less cheery, feel-good story than Simon. Simon was meant to make you smile all the way; while this book will have you much more conflicted about what you feel.

This is expected in a book with such themes, of course. Rejection is rarely ever fun, and while Molly (and the rest of the cast) doesn’t feel nearly as well developed as anyone in Simon, you do end up warming up to her – which works as proof of Albertalli’s writing skills. Rather than lift you up all the way, this novel manages to get you down at times, or at least it managed to get me down. Then again, I have anxiety issues and could relate to most of what was going on there – even when I haven’t been a teenager in just over a decade. But let’s be real here, isn’t rejection and the fear of losing your friends or family as time goes on and they move on to create their own families a universal theme?

Another thing that bears mentioning about this book is the huge, at times improbable-looking amount of diversity. As with Simon, Albertalli has filled her own little area of DC with colorful characters of different religions, races, sexual orientations, sizes, and species.

I can sense some species-ism going on here.

Back to the diversity, I love the representation although I did find it a bit difficult to believe at times – particularly due to the sheer amount of LGBT characters involved. Molly’s parents are two lesbians (father was a donor, so she doesn’t know him,) her sister is a lesbian, her love interest’s parents are also lesbians, there are a couple gay couples thrown around, and absolutely everyone around her throws a party when the SCOTUS declares gay marriage legal.

Oh yes, that’s an actual plot point. Possibly the most annoying one, because while a clear attempt to ground the book on real-life US and politics it felt forced. The chapter centered on it was, to be honest, one of the most boring parts of the book for me. Not that it damages the novel; the whole reference just felt somewhat tacked on to advance the plot even when it wasn’t necessary.

Anyway, my point about representation is…

This is a very idealistic, at times difficult to believe niche of the woods Albertalli is writing in.

I’m all for representation, but I couldn’t help but wonder what the chances were of these things happening with these people, particularly regarding their sexual orientation. I guess the cast could be a result of Molly being, you know, the child of lesbian mothers and therefore involved in the LGBT community since she was in the womb. Still, plot points around it – like her love interest casually also being the Jewish child of lesbian mothers – pushed my suspension of disbelief at times.

As a closing comment, I really liked this book. I loved its writing, its themes and, while at times feeling unlikely, its attempts at representation. It’s clear Albertalli is pushing for a world where all colors are the norm instead of just one and where everyone can feel safe and represented, and that’s something I can really get behind. I didn’t find this as enthralling as Simon Vs. The Homo-Sapiens Agenda, but then again there were several differences (themes, main character, general storyline) that made this story more difficult to connect with for me.

However, once I did, it was worth it.